Editorial:  Are you a racist, have you allowed racism to go unchallenged when you have heard it being said?  We would be the first to complain (hopefully) if we overheard homophobia being discussed as acceptable.  We mustn’t loose sight of the fact that we are all supposed to be ‘equal’ and that we must treat everyone as equal! 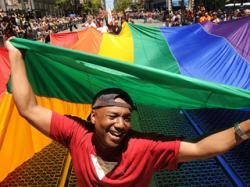 As much as the global LGBT community prides itself on inclusiveness and tolerance, results from a new poll show that while we like to see ourselves as wrapped in a rainbow, color is still an issue with many gay men.
A recent survey taken by the U.K.-based FS magazine which polled over 850 white, black, Asian, South Asian, Arab and mixed race gay men, shows an alarming amount of racial and sexual stereotyping among gay males. Results of the survey showed that more than two-thirds of non-whites surveyed experienced racism from within the LGBT community in the U.K. with 80% of blacks and 79% of Asians reporting the highest incidences of racism. As a minority group, hispanics reported the lowest incidences of racism with 35%.
An interactive poll on the FS website shows 87% of readers agree that the gay community is in someway racist.
The report also points to a disturbing trend where pick-up apps like Grindr were a prime vehicle for sexual racism.
“I’ve been blocked on apps because I am South East Asian,” says Ari, 39 from London, “or thought of as Muslim, even though I am not a Muslim. I have had abuse sent through messages, saying ‘go back home Paki’ or a question asking if Allah is happy I am on here.”
The FS poll is a follow-up to a previous study conducted by the publication where 400 white men were polled about sexual stereotypes.
When asked about stereotypes within ethnic groups, the respondents said:
• Black men have large cocks: 78% of white gay men in our survey believe this to be true.
• Asian men have smaller than average cocks: 75% believe this to be true.
• Latin men are crazy, wild and passionate: 70% of white gay men believe this to be true.
• Mixed race men are more likely to be accepted by white men: 67% believe this to be true.
• Black men are more active, strong and dominant in the bedroom: 60% of white gay men believe this to be true.
• Asian men are mostly submissive bottoms: 56% believe this to be true.
• Arab men aren’t gay if they’re top only: 35% thought this to be true.
• Latin men are mostly rent boys or in it for a passport: 10% of white gay men believe this is true.
While the FS polls only surveyed gay men in the U.K., the results are mirrored across the ocean in the United States where, according to Wikipedia , many people experience racism in the dominant LGBT community where racial stereotypes merge with gender stereotypes, such that Asian-American LGBTs are viewed as more passive and feminine, while African-American LGBTs are viewed as more masculine and aggressive.