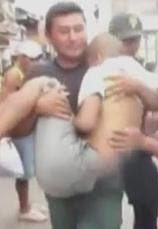 On 8 February, a 12 year old Peruvian boy from Iquitos committed suicide after an argument with his stepfather. The stepfather had shaved his hair shaved as punishment for being gay, so he would “learn to feel like a man.” The boy had also suffered strong harassment from his classmates at school. He hanged himself. He left a suicide note in which he expressed his hatred towards his mother’s partner.
The child was discovered by the mother when he was still alive. He was taken to hospital in Iquitos, but he died a few hours later. The news was broadcast on television which showed images of the child being moved to the hospital by his mother. The mother suffered an anxiety attack. Peruvian TV also showed the arrest of the stepfather.
Shangay.com notes gay this suicide is not an isolated case in Peru. In July 2013, a gay boy of 15 hanged himself after being insulted and assaulted by members of his family. In May 2013, a 20 year old also hanged himself after his father threw him out of the house when he learned he was gay. The most serious case happened last year when a gay 22 year old suffered serious burns after his father sprayed with gasoline and set fire to him.