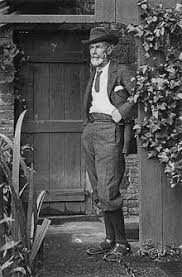 Reprinted from Gay Star Issue No 15 Spring 1985
It is a great pleasure to see th work of Edward Carpenter back in print.  Largely forgotten since his death in 1929, immensely popular as a radical writer whilst alive, Carpenter’s recent revival rests primarily on his attempt to develop a socialism linking the personal and the political.  The fact that the selected writings are published by Gay Men’s Press indicates the importance of gayness in Carpenter’s life and though.
Carpenter both delights and infuriates.  Alongside passages of genuine insight can be found both dotty and dangerous.  A highly individualistic thinker, he drew upon many of the intellectual currents of late Victorian Britain – marxism, anarchism, orientalism, mysticism, secularism, and developed, not surprisingly, a most idiosyncratic world view.  He displays, for example, subtely and sensitivity in analysing many of the forms in which women are oppressed in modern society and yet can state, in full mystical flight on force and nature, “I think every women in her heart wishes to be ravished”: and adds by way of bizarre qualification “but naturally it must be by the right man”.
On matters specifically gay it is necessary to be aware of the climate in which he wrote to read him properly.  In the wake of the Oscar Wilde ‘scandal’ and in the context of the public morality of the time discussion, of homosexuality was taboo and Carpenter was deserted by his publisher when he attempted to go into print.  He writes on gayness in a very positive but distanced manner – oscillating between enthusiastic praise of homosexuality’s contribution to the past, present and future of humanity and a rather defensive mode (gays are “they” not “we”) asking for toleration.
Carpenter was also confronted with, and influenced by a very poorly developed intellectual on homosexuality, much of it ill-conceived and censorious.  To a modern reader his talk of ‘congenital’ homosexuality, of the ‘intermediate sex’, of feminine souls in male bodies and vice-versa, will probably seem very dated and confused.  Also, lacking adequate data, he tends to make wild generalisations, attributing for example a sensitive nature to male gays and a forceful persona to lesbians.  He displays methodological naivety (like A L Rowse) in his Great Homosexuals in History approach, assuming that homosexuality is an unproblematic and unchanging category for historical research.  Nonetheless, a much more flexible conception ultimately emerges from these rigidities.  Gayness is no longer seen as the attribute of a type of person, but is rather seen as a universal element present, if only in potential form, in all people.  It is also more than a matter of sexuality for the gay dimension is part of a more general potential in humanity for a fully human existence.  IN this respect Carpenter’s gays (whom he terms Urnings or Uranians) are a type of socialist vanguard:
“the Uranian spirit may lead to something like a general enthusiasm of HUmanity, and … the Uranian people may be destined to form the advance guard of the great movement which will one day transform the common life by substituting the bond of personal affection and compassion for the monetary, legal and other external ties which now control and confine society.  Such a part of course we cannot expect the Uranians to palyunless the capacity for their kind of attachment also exists – though in a germinal and undeveloped state – in the breast of mankind at large.  And modern thought and investigation are clearly tending that way – to confirm that it does so exist”.
Noel Grieg provides a useful introduction combining important biographical material and his own critical assessment of Carpenter’s output.  In short this is a most welcome and handosmely produced book and it bodes well for the rest of the volumes in the series.
Review by Vincent Geoghegan