Pope Francis has expressed solidarity to an Italian author and LGBT activist whose work was recently banned by the conservative mayor of Venice over its purported seditious content in favour of gay rights. Francesca Pardi said she has received a written reply from the pontiff to a letter she sent earlier this summer, complaining about the continuous attacks she received from hard-line Catholics. The writer had become a target of campaigners against same-sex-marriage, after she created an independent publishing house printing children’s books that also depict gay couples.

Earlier this summer, several of her titles – including the award-winning book Piccolo Uovo (Little Egg), the tale of a lonely egg who meets straight and gay animal couples in its quest for a family – were listed among 49 publications ordered for removal from public libraries by Venice mayor Luigi Brugnaro, who said they corrupted the local youth. After an international outcry the list was reduced to two books, the subversive Piccolo Uovo being one of them.
In June, Pardi – who has four children with her partner, Maria Silvia Fiengo – wrote to the Pope to denounce what she said was a hate campaign launched against her family by Catholic associations. She also attached a copy of Piccolo Uovo, inviting Francis to read it. The Argentinian pontiff replied with a letter in his named written by Peter B Wells, the assessor for general affairs at the Vatican secretariat of state.
“His holiness is grateful for the thoughtful gesture and for the feelings that prompted it, hoping for an always more productive activity in the service of young generations and the spread of true human and Christian values,” the letter read. It also contained Francis’ personal blessing to Pardi and her partner. Pardi published its contents on Facebook, causing a stir in Italy.
“I was very touched by it,” Pardi told IBTimes UK. She explained that the letter was not supportive of gay rights but nevertheless marked an important change in the Church attitude towards homosexuals. “Obviously he [Francis] doesn’t agree with homosexuality and if he ever was to make such an opening he would never do so in a private letter to me!” she said. “However, only to consider me as an interlocutor worth respect is a tremendous step forward. I read it as an opening towards people and dialogue, a message of tolerance.”
Later, the Vatican said the Pontiff’s secretariat routinely replied to mail, adding that under no circumstances was the letter received by Pardi intended to endorse behaviours inconsistent with Catholic teachings. 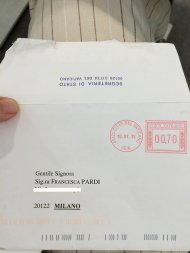 The letter came as the Pope faces a revolt from the conservative fringes of the Catholic Church over his open stance towards gay people. Five cardinals and more than 100 bishops were among the signatories of a worldwide petition urging the pontiff to clearly voice his and the Vatican’s opposition to same-sex marriage.
“This prayerful petition asks Pope Francis to clear up the moral confusion that’s been spreading against Natural and Divine Law,”said John Ritchie, director of Tradition Family Property Student Action group which launched the campaign. “If the enemies of the family continue to chip away at holy matrimony, the future of the family and civilization itself will be in even more serious peril.”
Francis has not expressed approval for gay marriage but has steered the Holy See in the direction of a more tolerant position, maintaining that homosexuals should be integrated and not marginalised with his famous “who am I to judge?” quote.

The letter also fuelled Italy’s heated debate over gay rights ignited by a recent government pledge to introduce a law on civil unions. The Mediterranean country is currently the only one in western Europe not to have any such regulation and thus considering same-sex marriage illegal.