Please sign the Petition below
By Melanie Nathan, March 18, 2015
A Pentecostal reverend, a major anti-gay protagonist, who called homosexuals evil, is set to speak at St James Church, Gerrards Cross in Buckinghamshire, in the United Kingdom and activists are outraged.
The controversial preacher, Rev. Simon Peter Emiau,  General Superintendent of the Pentecostal Assemblies of God (PAG) in Uganda,  was a critical partner to the American homophobic Evangelical preachers such as Lou Engle and Scott Lively who led the anti-gay crusade in Uganda,  and now he will be speaking in the United Kingdom at St James Church on the 23 March 2015.

In 2001, Emiau complained of homosexuals  “invading Mbale District.” “Our cities have become like the biblical Sodom and Gomorrah. There is a lot of immorality and homosexuals increasing in number even in our town, Mbale,” he said.

He encouraged  the Ugandan government and the people to fight the ‘vice’ before it was too late to control. And what followed his rhetoric was an escalation of anti-LGBT persecution, culminating in the call for the Kill The Gays Bill, its eventual passage, its invalidation and now further calls for the return of a similar Bill in the Uganda Legislature.
The crusade in which Emiau has participated caused incalculable damage and persecution, not only for Uganda’s gays, but also others around Africa, giving credence to the USA preachers who spewed the hate in the name of their brand of Christianity.
It is believed that Rev Emiau, with his Co preachers, did a lot of campaigning and lobbying to the president and MP’s as well as campaigning on radio and in church to actively lobby for the anti-gay law, which it is believed he continues to do at this time..
On 24 February 2014, President Museveni signed the AHA bill into law, toughening penalties for gay people.  It included life sentences for gay sex and same-sex marriage.
Soon after the Bill was signed Rev Simon Peter Emiau, Pastor Ssempa and other religious leaders held a rally in Uganda cheering the new law and exalting the lawmakers and President Museveni who ensured its full enactment. Thirty thousand people attended the rally, all supporters of this brand of Christianity.
While speaking at the event, Rev Simon Peter Emiau, representing three organizations of evangelical churches, compared Museveni’s stand for the Anti-Homosexuality Act to his “courage” in overthrowing the regimes that preceded him in power. “Your excellency demonstrated yet courage by signing this bill,” Emiau said.
And Quoting David Bahati (the Lawmaker who Sponsored the bill):

“Today, we come here again [to celebrate] sovereignty and freedom … [and] to take charge of our destiny. ~ Bahati.”

Rev. Simon Peter Emiau is fully aware that his actions have caused countless LGBTI people to go underground or into exile to escape the brutal persecution engendered by the call for such legislation and its ultimate passage. He is also aware that he has caused direct harm to health services needed for LGBTI people due to immobilized NGO’s and human rights defenders. This horrifying impact hurts all Ugandans.
Commenting on Rev. Simon Peter’s invitation to preach at St James Church in the UK, a gay man from Uganda Isaac Kawesi noted:

“This is totally an insult to the LGBTI community. I left Uganda because of people like Rev. Simon Peter who made my life a living hell. We will do whatever it takes to stop this man from preaching in England and if our effort fails, we are ready to hold a demo to show him and St James Church how unhappy we are”.

Rev. Simon Emiau, should be prevented from entering any Western Country that subscribes to the Universal Declaration of Human Rights, least of all be given platform in a country which expounds equality and basic human rights for LGBT people. The United Kingdom sees many asylum seekers seeking refuge from Ugandan because of this man and the harm he has caused. Ban him now!
SIGN PETITION TO INDICATE YOUR OUTRAGE HERE. 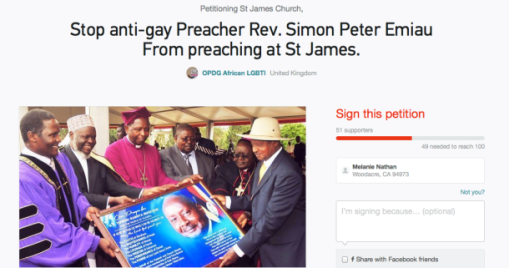