To make a ballet of the life of Oscar Wilde 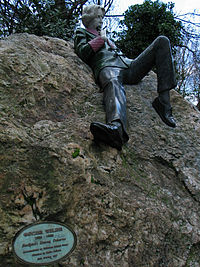 is to run many risks, mainly to do with the public’s perceptions of the man and his history. He was, after all, a great literary figure, and as the dramatic aspects of his life were somewhat lurid, the risk of melodrama is also run. The Israeli choreographer Domy Reiter-Soffer has not been able to avoid purple patches completely, but the end result vindicates his decision to tackle the subject.

He also arranged the score from various pieces by Bax, whose reputation as a self indulgent musical reactionary will not survive this outing. It was played superbly by the RT Concert Orchestra. Bryan Love’s lighting was also beautiful. Patrick Murray’s designs, based on Art Nouveau motifs brought to mind a giant bras bedstead.

Wilde’s life is observed chronologically, apart from the Prologue, in which John Kavanagh’s voice-over, reads Wilde; an early letter setting out his high literary ambitions. Kavanagh affects the lugubrious, rounded chest-voice’ and enervated manner usually used in reading Wilde. The only recording of Wilde’s voice demonstrates it to have been high-pitched, almost feminine, as opposed to effeminate, and somewhat staccato in delivery. His quips may have been closer to the modern wise crack’ than to the polished aphorisms of his predecessors as great wits.

Scene 1, The Dream, in which Oscar foresees his downfall, with a Br nhilde-like figure to the fore, is difficult to understand. Why the Wagnerian elements for this least musical of men? Why is he the object of the attentions of a Valkyrie whose duty it was to guide the souls of dead warriors to ? One can only assume that it is to give to Wilde’s life a satisfying coherence. But his downfall was not coherent at all. It happened when he was at the height of his fame and popularity he was almost solvent.

He fell from grace because he struck a suburban pose, instead of impaling the Marquess of Queensbury on a honed and sharpened epigram. Queensbury was a dreadful human being. His only useful act in a longish life was to give his name to a set of relatively humane rules in Boxing. The only person who managed to be more uselesSeand unpleasant was Bosie’, Queensbury’s son, Wilde’s lover.

Bosie is presented here as a pathetic, almost tragic, figure haunted by d?”mons his youth probably was a factor in his recklessly foolish behaviour. But he used Wilde as a bludgeon in his feud with his father. He was as unconcerned about the fact that he broke Wilde, physically, socially, and almost, spiritually, as he would have been about breaking a stick. He is given jagged, edgy, movements when not engaged in lyrical pas de deux with Wilde.

Because it has to carry a fairly specific story-line parts of this ballet consist of somewhat bland steppin’ and leppin’, Act 1, Scene 3, Oxford Days, being a case in point. This sort of thing is off-set by the CafeRoyale scenes, the street scene followed by the one in the house of Taylor, Wilde’s procurer and betrayer.

Oscar’s Other Self (so described in the programme) surfaces in this brothel scene. He is a clown in a beautiful green silk clown’s suit, with a sad face, not unlike that of Nijinsky in Petrushka.

It is somewhat unfair to quibble about the interpretation of Wilde’s life presented here. It is what the artist, the choreographer, makes of it that really matters. But, judging from Oscar Wilde’s early attempts at drama and verse, he perceived of himself as a tragedian and not a jester.

He also had a quite strongly Leftist perspective on society despite his (apparent) delight in duchesses. Thus, his brilliant pamphlet The Soul Of Man Under Socialism, and the subversive elements in the later comedies.

Oscar’s fairy tales are the measure of the man. He never really became an adult. That is why Bosie found him so malleable. It is also why he never felt real remorse for his objectively outrageous behaviour towards his wife, Constance, and their two sons.

The choreographer appears to think Oscar ought to have had human feelings for Constance, and their are a number of awkward moments where the Wilde figure dithers between Ada Leverson / the Sphinx’ and Constance, then Robbie RosSeand Constance, and eventually Bosie and Constance. Oscar, unfortunately, had the impermeable ego of a five year old.

It is a great pity that this beautiful, substantial, absorbing work of art should be the final product of the Cork-based Irish National Ballet. It iSean especial pity as Domy Reiter-Soffer has precisely the talents to make viable ballets out of Oscar’s taleSeand short stories, not to mention Dorian Gray, Salome, and even, possibly, Vera, or The Nihilists.

He could also make ballets based on the literary efforts of one Dermot O’Byrne (alias Master of the King’s Music, Sir Arnold Bax), especially Red Owen, a play about Eoghan Rua Suilleabh in the last great Gaelic poet of .