” I slightly disagree with the line [Peter Tatchell has] taken on this. The story re-emerged when Jonathan Wynne-Jones at The Daily Telegraph rang me some weeks ago now about an article he was doing for The Sunday Telegraph. Evidently I’d referred to 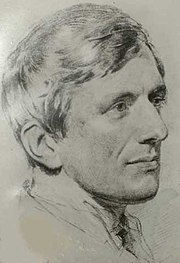 Newman and St. John’s burial together a couple of years ago in another interview for the life of me, I couldn’t remember it! After The Sunday Telegraph piece appeared, in which my comments were paraphrased rather than accurately quoted, I got accused by various fundamentalist Catholic blogs of smearing’ Newman see Catholic Action UK ! The story has rumbled on ever since. I, of course, immediately checked that chapter in The Friend [Alan Bray, The Friend, Chicago Press, chapter 7] for the accurate details. There’s been interesting recent coverage in The Tablet both in editorial comment and in its Letters pages.

Interest emerged again a couple of weeks ago. I did interviews with BBC Birmingham and BBC Oxford. The line I’ve been taking is as follows: It’s actually irrelevant to me where Newman is buried and preoccupation with this is a digression. Given that the word ‘homosexual’ had been barely coined when Newman was alive, it’s not entirely appropriate to suggest that he would have had such a consciousness of homosexuality’ or sexual orientation, per se, even though as you suggest, given his profound historical knowledge of the Christian tradition in its broadest sense, he would probably have been aware of the kind of things Alan Bray points to. It’s also inappropriate to read back into the 19th Century our contemporary gay consciousness’.

I’d tend to agree with the Oratory superiors’ hypothesis that given the type of person Newman was, had he known he would be raised to the altars’, he would have been the first to submit his obedience to the demands of the Church. Nevertheless, there is simply no way the intensity and depth of his relationship with Ambrose St. John can be airbrushed out of the equation. I’m not calling for them to be exhumed and re-buried together, but cannot agree that the vocabulary used by Newman about Ambrose St. John is poetic’, as was suggested by an interviewer at BBC Oxford, probably given that lead by someone from Birmingham Archdiocese. This was proposed on the grounds that Newman was a great poet e.g writing The Dream of Gerontius , and various hymns. Even if it was poetic’, it begs the question: what level of human reality prompted such intense poetic language.

Some of those who have commented, like Peter Tatchell, reveal their ignorance of Catholic procedureSeand practice and have been too simplistic in ascribing the reason for exhumation as a desire to bury’ the Newman/St. John story. I had heard a couple of years ago that one of the reasons for the delay in confirming Newman’s path to beatification (Blessed) the interim stage in the total process to canonization (Saint) was the investigation of the nature of his relationship with Ambrose St. John

. From what I have heard, Vatican officials were fully aware of its significance, but needed to be assured that such a relationship did not compromise the mutual commitments to priestly celibacy that both Newman and St. John had made as members of the Oratory. This would be perfectly consistent with the current state of Catholic teaching on homosexuality which distinguishes between sexual orientation and sexual activity. In the various interviews I’ve given, I’ve stated very clearly that there is no evidence or suggestion that either of them compromised the demands of celibacy.

The procedures for beatification the first international and public stage in the process to canonization, as opposed to the Venerable’ status which Newman currently enjoys as part of a local (Birmingham/UK) process requires that the body is verified as being whom it is claimed to be, and therefore a requirement for exhumation. Fragments of bone or other verifiable body matter are then taken as 1stClass relics’, one being preserved in the Vatican, and others locally. This is the stage where such bodies are usually re-interred in a suitable place for public veneration. There have been all sorts of problems relating to Rednal Cemetery between the Oratory and the local authority. I’ve never been there, but I gather it’s surrounded by a pretty grotty housing estate, and access is a nightmare. The Birmingham Oratory and the Archdiocese are clearly aware that Newman will attract many pilgrims from all over the world, and the current burial place simply could not cope with this. It is also unprecedented for someone who is not a candidate for canonization to be enshrined with someone who is. This applies to married heterosexual couples as much as to anyone else. Roman Catholic canon law and procedures could not allow formal public veneration of someone whose life has not been investigated in the same way, and to whom so-called miracles have not been ascribed. The only couples I am aware of who have been interred together in this way are those who are BOTH candidates for sainthood, and these are few and far between.

I have no doubt that there are many in the Vatican who might wish to use such exhumation to bury any homo-positive notions about Newman, just as all sorts of religious authorities, and not just Roman Catholic, have done at various periods throughout history with regard to issues around the place and role of women, and even black people and slaves.

he was a tortured and anguished human being, even quite neurotic. There is also a degree of evidence from other sources about his effeminacy, not that this should, of course be equated with a homosexual orientation. If sainthood is about being the best possible human being you are intended to be, then there can be no doubt that part of Newman’s journey towards such a human betterment must be ascribed to the fulfillment achieved through this relationship with Ambrose St. John. Just as many married clergy would say that their vocation and ministry is enhanced because of their Marriage rather than in spite of it, so I’m sure Newman’s life was enhanced by his intense friendship with St. John. It contributed to him becoming the better human being he became, and hence now being venerated by so many CatholicSeand others as a saintly Doctor of the Church.

Underlying this, as well, is the concern in some Vatican quarters that Newman’s sainthood should not be politicised’, e.g. that he be claimed as a gay patron saint’ for example. Such politicising’ reservations have been made in more recent times about Archbishop Romero of El Salvador [I am very familiar with the progress of is beatification process]. In the current Vatican climate of a return to pre-Vatican II models of Church and understandings of theology and ritual, there could also be concerns about how some of Newman’s key theological insights are promoted in the contemporary Roman Catholic Church: the development of doctrine, issues of authority and reception of teaching by the body of the faithful, the rights of conscience, etc.