When we heard that Ms Susan-Anne White was standing as an independent candidate standing for MP in Northern Ireland and has apparently  said she would criminalise adultery and homosexuality, according to a leaflet posted online; we had to take a look at her campaign. 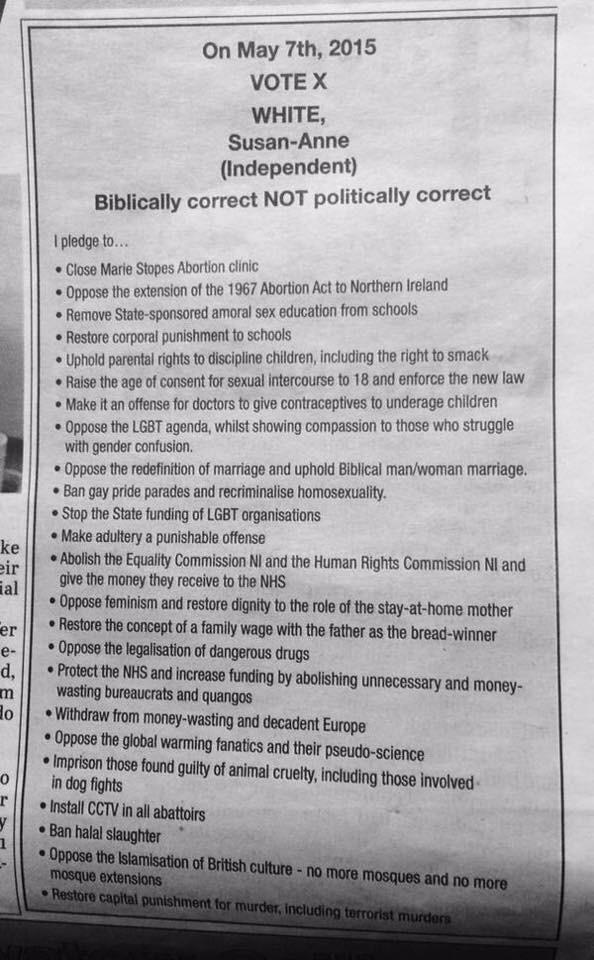 For NIGRA what is interesting is that May 2014 Ms White, a Trillick woman,  stood as a candidate for the Omagh area.  At this time we had tried to find out more about Ms White, and were able to come across the a document intorducting the Society and Family Enterprise Party (SAFE) which she stated she belonged to, we again reprint this for your education:
Introducing the
SOCIETY AND FAMILY ENTERPRISE PARTY (S-A-F-E)
Preliminary Policy proposals
Based upon a radical return to the Judeo-Christian heritage of Western civilization, the alarming moral, social and political crises of our times demand the vision and values of this new party.
Believing that the basic unit of society is the family, at the heart of the SAFEagenda is the reaffirmation of properly-defined marriage and family cohesion. Domestic disintegration is the main cause of our social and political decline. A return to well-established parenting is imperative. The recovery and rectification of fatherhood and motherhood roles is essential to disciplined, happy and well-adjusted child-rearing. The tax system should favour families.
THE TEN INTENTIONS
We need to be:
SAFE from growing homosexual militancy (Section 28 being restored).
SAFE from the Darwinian-driven ‘pc’ educational agenda (and inappropriate sex instruction).
SAFE from the neo-fascist and resource-draining EU (impacting our military and other capabilities).
SAFE from the islamification of our culture (with state-assisted emigration of Muslims).
SAFE from every category of criminality (political and corporate, major and petty).
SAFE from decadent priests in apostate churches (Roman Catholic, Anglican and others).
SAFE from over-sexualised and over-violent entertainment (with internet regulation).
SAFE from unethical economics (principled investment, with just pricing and honest labelling).
SAFE from corrupt career politicians (especially those pursuing a ‘gay’ agenda).
SAFE from anti-democratic ‘left’ and ‘right’ extremism (with liberty for peaceable minorities).
This SAFE proposal is floated for your interest.
Dr Alan C. Clifford (a Pastor of the Reformed Faith, with no personal political ambitions, simply a desire to motivate others who might have a patriotic conscience and a concern to do good in these evil days).
‘There shall be showers of blessing…They shall be SAFE in their land; and they shall know that I am the LORD, when I have broken the bands of their yoke and delivered them from the hand of those who enslaved them’ (Ezekiel 34: 26-7).
‘Finally, my brethren, rejoice in the LORD. For me to write the same things to you is not tedious, but for you it is SAFE’(Philippians 3: 1).
Link: https://libertarianalliance.wordpress.com/2013/08/23/new-patriotic-politics-introducing-the-safe-party/
As we have said before, before you vote make certain you know what the candidate stands for, and vote carefully, we may have them in power for 5 years ruling our lives!