You are here: Home / Campaigns / DO THE GAY ACTIVISTS ALLIANCE SUPPORT IAN PAISLEY ??? 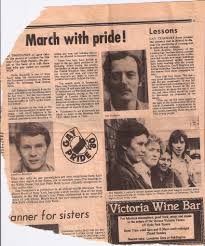 During the recent Gay Pride Week in London, members of the Northern Ireland Gay Rights Association were attacked at a meeting organised by the Gay Activists Alliance by supporters of the Troops Out Movement who argued that we should not be making any demands for a change in the law.  They said that the Government, which could make those changes, the Westminster Government, is a foreign Government which has no business legislating for Northern Ireland. By demand-ing changes in the law we are recognising the right of this foreign Government to rule over us.
It’s funny how one always has to go to London to hear arguments like that.  No one here has ever suggested that we put our interests into cold storage until the great day when Mr. Haughey becomes our Prime Minister.  Whether we want to see a united Ireland or maintain the union with Great Britain, the argument is stupid and only English people – or people who have been living a long time in England – could have thought of it.
THE CONSTITUTIONAL QUESTION
NIGRA is solely concerned with improving the lot of homosexuals in Northern Ireland.  It contains members with nationalist sympathies and members with unionist sympathies.  NIGRA as such will continue to work for gay people whatever government is in power.  We don’t argue that our interests are necessarily more important than the Constitutional question, but we leave it to members who feel strongly on either side of that question to join whatever other political bodies they like, without their decision prejudicing their membership of NIGRA.
At present, Northern Ireland exists as a region governed by Westminster and separate from the Republic.  There is no point in us asking favours from Mr Haughey who – in the unlikely event of his wanting to – can do nothing for us.  Westminster is the government with which we have to deal.  If that situation changes, we will change with it.
But perhaps our interests are affected by such ‘political’ considerations.  One thing we can probably all agree is that we don’t want to be governed by Dr Paisley who has been very active in opposition to us.  Paisley is very popular in Northern Ireland not because of his campaign against us, but because he has represented himself as the most hard line opponent of a united Ireland.  And, rightly or wrongly, most of the people living here are strongly opposed to a united Ireland.
PAISLEY IN POWER?
Because of Paisley’s popularity, any devolved government in Northern Ireland – whether it is relatively powerless thing proposed by Humphrey Atkins [the then Secretary of State – upstart 2013] or a full-blown independent

Parliament – is likely to be headed by Paisley.  That is not a prospect that can fill us with delight.  So we are not enthusiastic about the idea of having a devolved government in Northern Ireland.
Furthermore, although the law in the rest of the United Kingdom is far from satisfactory, it is still better than the law here and in the Republic (where, in both places, the pre-1967 laws are still in force).
We are therefore pressing for the same laws to apply throughout the UK.  And in that general principle we have – according to a recent opinion poll – the support of over 90% of both Protestants and Catholics.  For most people, homosexuality is a marginal issue and, in what they would see as the main issues, we have always had much the same legislation as the rest of the UK, since Stormont used to pursue a ‘step by step’ policy of keeping in line with Westminster.  For example, we have the welfare legislation Labour introduced after the war [WW2 – upstart 2013] despite the fact that our largely Tory devolved government disliked it.  Since there is no great desire for legislation that is very different from that passed at Westminster, it seems that, so long as we remain in the UK, there is no need for us to have any sort of devolved Parliament.
REMOVAL OF THE TROOPS
But the Troops Out supporters aren’t interested in such a modest, ‘reformist’ approach.  They think that we should throw our interests as homosexuals to the winds, and lend all our support to efforts to get rid of the army (i. e. that we should join the Provisionals.  Or possibly the Irish Independence Party [the ‘double-I’ P, now defunct. It, like the People’s Democracy, ‘kept the seats warm’ for Sinn Féin – upstart 2013] who are the only people who are calling immediate withdrawal of the troops).  The likely result of the immediate withdrawal of the troops (after a period of open and vicious warfare) would be the establishment of an independent Ulster – with Paisley on top.  If there were to be a united Ireland, the troops would have to enforce it.  Is this what these people want?  Is it what they think we should want?
No.  We are not prepared to campaign for the removal of the troops.  And we are even prepared to oppose the removal of the troops unless there is some guarantee that it won’t result in a (possibly smaller) Paisleyite state.  And as long as we are in the UK, we want (at least) the same laws as far as homosexuals are concerned as prevail in the rest of the UK.  In making this demand, we expect the support of everyone throughout the UK who is involved in gay politics.  And we support them in their search for further changes.  AS far as those of us who want to see a united Ireland are concerned, that no more compromises their principles than demanding better pay and conditions would compromise the principles of a trade unionist who wanted to see a united Ireland.
The only possible effect of the policy proposed by the Gay Activists Alliance would be to split us into a Republican Gay Rights Movement and a Loyalist Gay Rights Movement, both of them subjecting their particular interests as gays to the greater interest of their respective ’causes’.  We are not prepared to oblige them.
Semi-editorial written, probably by Peter Brooke, then – 1980 – GS Editor.