You are here: Home / Book Reviews / The Controversial Cartoons that are Said to Have Inspired the Terrorist Attack Against Charlie Hebdo
At least 12 people were killed in a shooting at the offices of French satirical magazine Charlie Hebdo Wednesday morning. Multiple masked gunmen entered the building, opened fire on the writers, and escaped in a getaway car. The shooters reportedly yelled “Allahu Akhbar” (“God is greatest”) during the assault and “We have avenged the prophet” as they sped out of the office. Among the confirmed dead are two police officers and Stephane Charbonnier, a journalist and editorial director. French President Francois Hollande has called the shooting “a terrorist attack.” The gunmen and driver are still at large.
The French Muslim community has condemned the attack. Dalil Boubakeur, rector of the Great Mosque of Paris, announced on behalf of French Muslims, “I want to denounce the horror and the unspeakable and show our compassion. We condemn what just [happened] in the name of all Muslims. This is an act of war in the middle of Paris. “
Chances are, if you’ve heard of Charlie Hebdo before, it has been because their satire has inspired the ire of Islamic extremists; the target of the magazine’s humor is frequently religious, political and social mores.
The Guardian‘s Anne Penketh reported from Paris that the magazine’s latest cover (featured in the most recent tweet from @Charlie_Hebdo_) took aim at Islam:

The weekly’s latest jibe, published on Twitter moments before the terrorist attack, was a cartoon wishing a Happy New Year ‘and particularly good health’ to Abu Bakr Al-Baghdadi, the leader of the Islamic militant group Islamic State (Isis).
The magazine describes itself on the social network as the ‘irresponsible newspaper’. Its cover this week features the provocative new novel by Michel Houellebecq, Submission, which satirises France under a Muslim president.
Charlie Hebdo’s editor, Stéphane Charbonnier, has received death threats and lives under police protection. He has always insisted that the cartoons depicting the Prophet were harmless fun, although he is well aware that Islam does not allow public images of Muhammad, which are believed by Muslims to be sacrilegious. 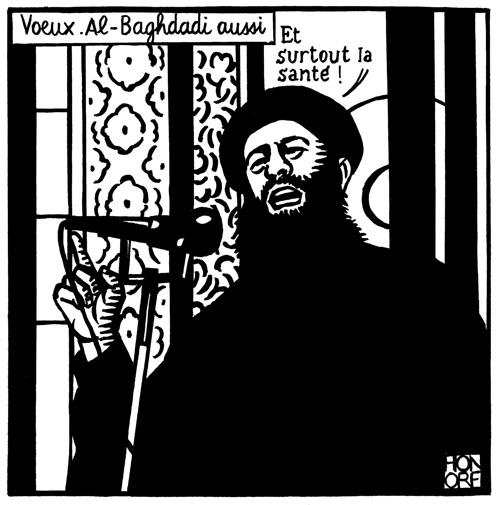 Today is an extreme case of horror, but it’s not Charlie Hebdo’s first experience with violence.
The offices were firebombed in late 2011, after running a spoof issue “guest edited” by the Prophet Muhammad honoring an Islamist party’s victory in Tunisian elections. The special issue, in a winking reference to “Shariah law,” was named “Charia Hebdo,” and showed a cartoon of Muhammad along with the line, “100 lashes if you don’t die of laughter.” At the time, editor Stephane Charbonnier described the post-attack wreckage of the office: “We can’t put out the magazine under these conditions. The stocks are burned, smoke is everywhere, the paste-up board is unusable, everything is melted, there’s no more electricity.” The website was also hacked, and members of the staff received death threats.

Less than a week later, the magazine’s front page read “L’Amour plus fort que la haine” (Love is stronger than hate) and showed a male Charlie Hebdo cartoonist and a bearded Muslim man engaged in a kiss, the still-smoking magazine Charlie Hebdo offices burning in the background.
In 2012, the magazine included multiple caricatures of the Prophet Mohammad in which he appeared naked; one was called “Mohammad: a star is born,” and showed a man bent over so his beard was the only thing covering the lower half of his body. The cover depicted Mohammad in a wheelchair being pushed by an Orthodox Jew.

The French government implored the magazine not to publish the issue — at the time, protests over a prophet-mocking video produced in the U.S., “The Innocence of Muslims,” were raging across South Asia and the Middle East — but Charlie Hebdo persisted; the government shut down schools, consulates, cultural centers and embassies in 20 counties as a precautionary measure. Riot police were also stationed at the Charlie Hebdo offices for protection.
The then-editor-in-chief, Gérard Biard, did not back down from the magazine’s call to publish the issue. “We’re a newspaper that respects French law. Now, if there’s a law that is different in Kabul or Riyadh, we’re not going to bother ourselves with respecting it. What are we supposed to do when there’s news like this?” Biard went on to describe the magazine as “atheist,” “democratic,” and a supporter of “laïcité,” France’s secularity.
Charlie Hebdo republished cartoons of Mohammad in 2006 that had originally appeared in a Danish newspaper; the images sparked protests throughout the Muslim community.
Charlie Hebdo’s history of taboo-challenging content is as old as the magazine itself. Its earlier form, Hara-Kiri Hebdo, was banned in 1970 for spoofing what they saw as the too-deferential coverage of former president Charles de Gaulle’s death by the French media. Editors picked Charlie Hebdo as a new name to get around the ban; the new title jokingly referenced both de Gaulle and a monthly comic book, Charlie Mensuel, which got its name from Charlie Brown.
The magazine, which comes out every Wednesday, came on the scene in 1969; it folded in 1981 due to poor sales but was revived 11 years later. Charbonnier, one of today’s victims, had held his post as editor in chief since 2012. This is reportedly his last cartoon: 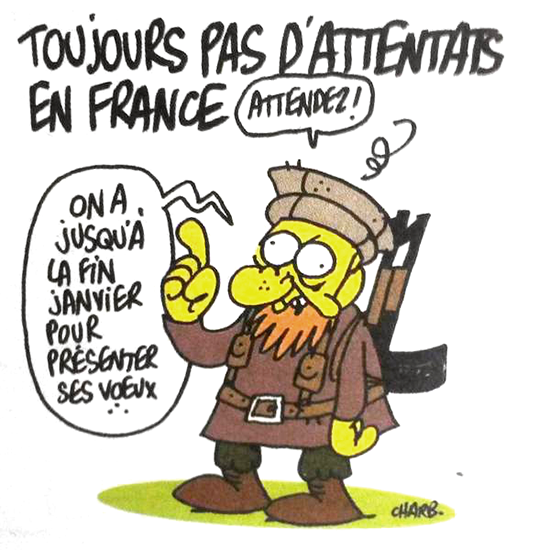 Former French President Nicolas Sarkozy issued a statement, reported in Le Monde, expressing outrage at the violence and affirming the importance of French free speech: “This attack is a national tragedy. This is a direct, savage attack on one of our most cherished republican principles: freedom of expression. Our democracy has been attacked. We must defend it without any weakness. Absolute resoluteness is the only possible response. Our nation is in mourning, struck in the heart, the Republic must gather assemble together. I call on all French people to reject the temptation of stereotyping.”